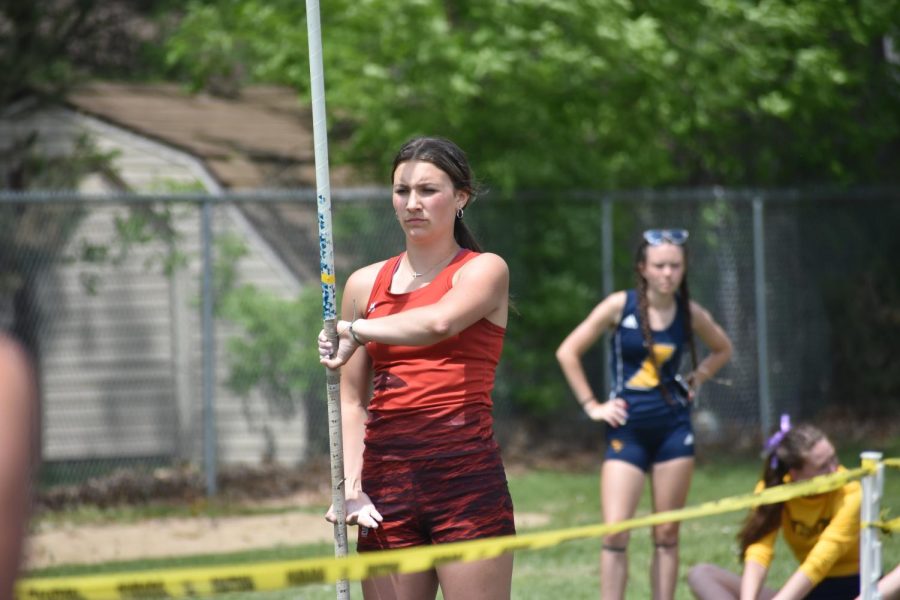 Natalee Hoyt prepares to vault at one of her recent meets.

The St. Louis High School track athletes have been working incredibly hard this season to set new PR’s for themselves and to set new school records, one of them being Natalee Hoyt.

Hoyt broke the St. Louis High Schools’ pole vault record this track season as a sophomore. Previously the school record was held by Nichole Michael. Michael set her record in 2004 and held that record for about 20 years until Hoyt broke it with 9’ 7.25”. Hoyt stated, “ I am very excited that I broke the school record! I have been working very hard and practicing all the time to achieve this goal.”

In her freshman year, she tried to go for the school record. Unfortunately, she did not reach it but achieved it May 13, 2022, at the Alma invite. With more practice and hard work throughout the summer, and she knew that she would be able to break the school record. With confidence, she gave herself the goal of breaking the record by the end of her sophomore year. Hoyt later stated, “Honestly, I am surprised that I am only a sophomore and hold the school record but my hard work has paid off, and I am excited to see how many more times I can break my own record and hopefully put it out of reach for a while.”

Hoyt’s coach Breezy Penncok stated “It’s an honor to coach Nat and to continue to watch her succeed. Coach Holmes and I are also so blessed to have her as a member of our team.” Even though Hoyt would have eventually broken the school record at some point, Coach Breezy was a big help to her and mentally and physically supported Hoyt all the way.

Some of Hoyt’s traits that help make her a good athlete are: good teammate, coachable, and competitive. All of these qualities more than likely helped her also complete her goals and become the new record holder for pole vault.