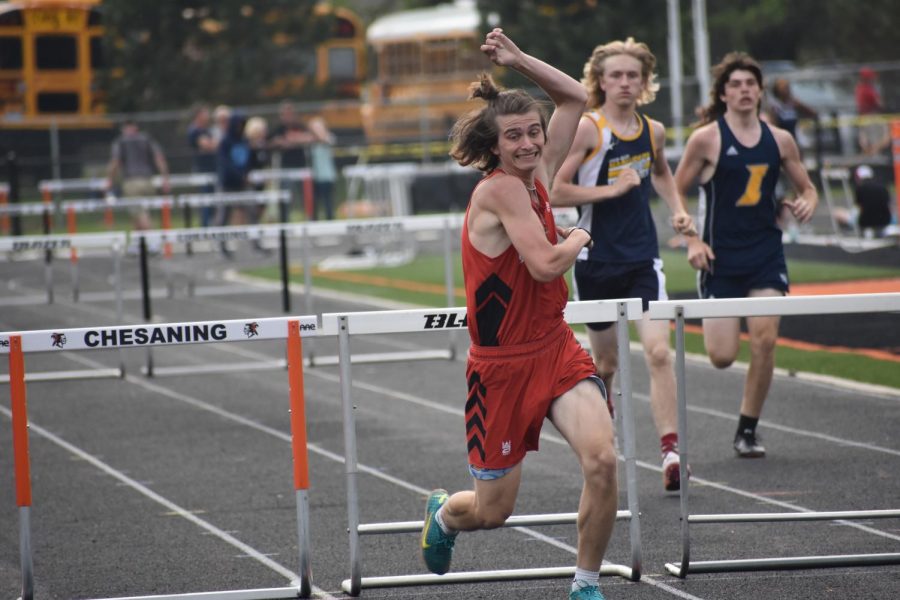 Will Erikson finishes his hurdles with a big smile on his face as he beats his PR.

Recently, there has been some big news within the Shark Tank as the St. Louis High School girls’ track placed first at Regionals in Chesaning, May 20! The boy’s also put up a big fight and earned third place!

The girls who earned their spots in first place were Natalee Hoyt for pole vault and Libby Munderloh in the 200 meters with a personal record of 26.30. Munderloh also earned a spot in first within the 300 hurdles. Korah Honig placed first in discus also earning a PR of 109-11. Jaiden Dickman placed second in the 800-meter, also finishing with a great PR time of 2:22. 69. Monika Borie placed third in the 300m hurdles followed by Lilly Massaway in third with a PR time of 51.97. In the 400-meter, Adry Munoz placed 3rd and Korah Honig placed third with a shot put. The girls’ relay team for the 4×400 placed 2nd followed by the 4×800 where SLHS also placed 2nd.

Although some may not have placed as high as they wished, their hard work and dedication did not go unnoticed. Many of these female athletes broke many PRs! In discus, Kylie Acker beat a PR of 91-01! Lilly Spencer increased her shot with a distance of 30-07.5! Kiersten Wenzlick, who had an injury, pushed through it and beat her PR in the 100m hurdles with a time of 18.88. Massaway had a PR of 14.04 in long jump!

Wenzlick expressed, “The meet was very organized, and I liked it a lot. It was a struggle with my knee pain, but I pushed through it because I wanted my team to succeed. Getting a PR was super exciting and I was glad I finally ran my event within the time frame of 18s. Overall this meet was one to remember and it was amazing.” Lilly Spencer also expressed, “When I PRed at regionals I felt shocked and very happy. I think the thing that pushes me to continue to do my best in track is if I’m going to do something, I’m going to try and do it well.”

Not only did the lady Sharks put up a good fight, the boys’ team also qualified some athletes for state! Nate March placed second in the 800-meter earning a PR of 2:04.03, Aaron Bowerman took second in the 3200-meter also earning a PR of 9:55.44. Ben Dousuah took home second in shot put with a new PR of 46-04. Dousuah also placed third in discus earning a new PR of 132-08. Within the 1600-meter, Nate March placed third followed by Aaron Bowerman in fourth, with Ben March placing in fifth. The boys’ relay team for the 4×800 had placed in second!

All individuals and relay teams who placed first or second will now compete at the Michigan High School Athletic Association State meet June 4.