Hall and Oates Single “Adult Education” speaks to the youth 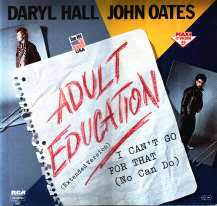 Cover for the Hall and Oates single.

Hall and Oates have released many great hits over the years of their career, that include: “Maneater”, “You Make My Dreams”, “I Can’t Go For That (No Can Do)”, and most famously “Out of Touch”. Yet none of these seem as fitting as “Adult Education”, A song about all things high school. From your high school sweet heart, to the grade division, and of course the clothes you wear, “adult education” is, of course, the act of people who have dropped out of school and return in hopes of receiving their GED. Yet the artists offer an alternative meaning in this song: that kids need to be informed life exists after they graduate. “Adult Education” Is to mean learning to grow up and become an adult.

The introduction of “Adult Education” is genius. After only the first two stanzas, one is instantly transported back to a time they were in high school, or their current high school. The intro is as follows:

“Afternoon in the homeroom, they’re about to let you go.

And the locker slams on the plans you had tonight.

In the lot, the boy that’s idling by doesn’t rev your heart.

‘Cause it’s only lonely spots he shares with you.

This introduction masterfully sets the tone for the following song and doesn’t belittle or poke fun at the idiocy of high school students. It merely acts as an accurate representation of how high schoolers act and think. According to Saint Louis High School student Grant Bebow, “Despite being released in 1984, Adult Education is in most ways, more relevant than ever. More kids now than ever see their lives beginning and ending in these halls. Few see life continuing after Grade 12.”

The song is riddled with references to high school that are sure to trigger at least one memory of anybody’s dark high school days.  Adult Education isn’t just a lyrical masterpiece either, it sounds great and can get stuck in one’s head on repeat for hours. The chorus and heart of the song is very catchy as well,

“The student body’s got a bad reputation,

What they need is adult education.

You go back to school It’s a bad situation,

What you want is an adult education.”

According to Songfacts, in an interview with Daryl Hall, “That song is about something I still believe: That one of the big problems with the world is people never grow up- And the song is a reminder that there is life after high school. That there’s another way of looking at the world.”