SLHS Drama club will be putting on a spring show this year! 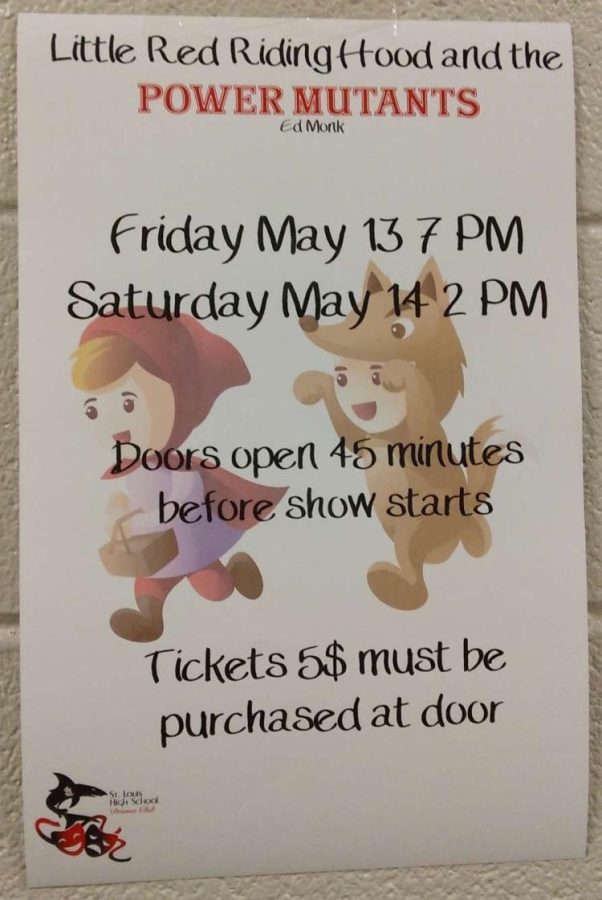 This photo shows off the flyers for the Drama club performance.

Gather around theatre fans St. Louis’ Drama Club (SLDC) spring production of Little Red Riding Hood (and the Power Mutants) comes to the St. Louis High School stage on May 13, at 7 p.m. and May 14, at 2 p.m. tickets at the door are $5. Doors open 45 minutes before the show.

For weeks, the SLDC actors/actresses have been racking their brains to learn lines, characteristics, blocking, and how to truly bring a play to life. These students from both TSN Middle School and SLHS have been working since March from Monday-Thursday every week to perfect and enjoy their club.

“Although it was a fun experience to perform online last year, I am excited to perform live finally! Nothing beats the energy from a live audience,” director Mrs. Wood said.

There are two fantastic seniors in the drama club this year, Kenny Baker and Robert Long-Terwilliger! Long-Terwilliger has been acting with the SLDC since he was a freshman, making him a four-year ‘legend.’ Many students look up to these two seniors, admiring their experience and the way they easily let go of their nerves to just be themselves and their character.

“Last year when they were talking about drama club over the announcements, I made a lot of jokes about joining drama club and being an amazing actor,” said Kenny Baker. “I actually ended up joining, and had a lot of fun once the nerves wore off. I would definitely say the drama club has been one of my best experiences in high school.”

“I feel that my last year of drama was rough, mainly due to the fact I won’t be here anymore and it’s sad to go, but I had a lot of fun doing it,” Long-Terwilliger said. He added, to which the other cast members agreed, that he felt he left a major impact on the drama club.

The cast has many fun/favorite moments from the multiple rehearsals they’ve had. When asked what one of her favorite memories this year was, Mrs. Wood responded that it was the “costume closet raid” the club had, and that not only was it a stress reliever, but it was the moment the cast finally clicked together and became a family instead of just a cast. Seniors Baker and Long-Terwilliger both responded with “the many times Mrs. Wood had to say ‘Twilly, put a shirt on.’”

Mrs. Wood was asked for some advice, and said, “everyone and anyone who thinks they might even be remotely interested in drama, just come try it! There is a home for everyone at SLDC no matter what your acting background may (or may not be)! Even people who claimed they could never act and that are too scared to get in front of a crowd have found that it’s so much fun to be up on stage. Even if acting truly is not your calling, we always need stage crew to help out backstage! SLDC will continue to perform spring productions at the high school, so keep a lookout next winter for information about auditions in 2023. You can also keep up to date with SLDC through our Instagram page, SLHS Drama Club.”