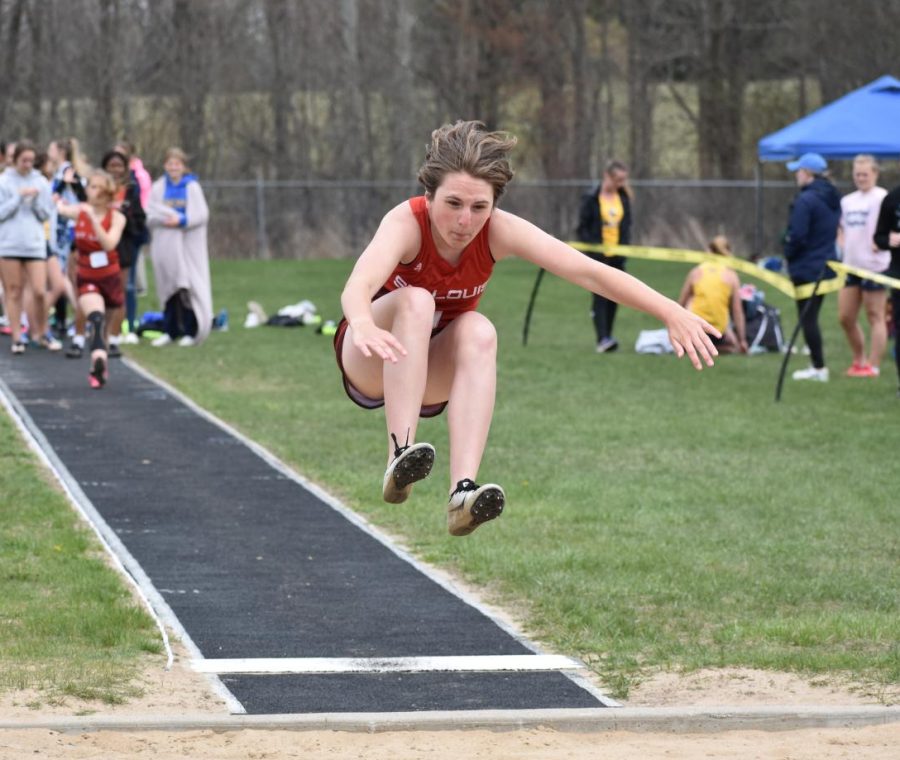 The Sharks came away with another dual meet victory Wed. April 4, in Hemlock.

The meet had a few complications, but the Sharks didn’t let that get in the way. Originally it was to be an old-fashioned duel with just the two teams until the Hemlock coach invited three other teams. Having a five-team meet, and in the middle of the week before the big invitational on Friday, sparked more competition and drove the athletes to success! Both the boys’ and girls’ teams came away with a TVC win against Hemlock, and also scored more than Valley Lutheran, Standish Sterling, and even class B Ogemaw Heights.

A school record was broken by none other than senior Libby Munderloh! She had a PR in the 300m hurdles to take first place, beating the previous score of 47.74 by a second. Now, with her time of 46.73, she is currently ranked first in the state for D3. And is ahead of the second ranking by three seconds! She said, “I have room for improvement so that is really exciting and hopefully as I get more competition at invites and such, I will be able to further improve my time.”

For the sprints, Monika Borie and Kaya Munoz both had PRsin the 200, and Kiersten and Mikayla Haag did as well in the 100-meter hurdles. Abby Dice took first in the 3200 with a time of 13:35.71. There was also a big PR by Lilly Spencer, who had a throw of 29’6. She is definitely stepping up as a new thrower, which is essential to the team since Brooke Campbell is currently out due to an injury.

The boys’ team also had a successful day, especially in the long distance events. Senior all-stater, Nate March, commented, “Discus crew swept the other teams as expected. It was a great day and a special thanks to Hunter Salladay for providing sick headbands for the boys.” Who knows what power those headbands hold, considering the victorious results that day. Aaron Bowerman, Ben March, and  Dylan Marr took top three in the 800. Bowerman and Ben both had PRswith times on 2:09.21 and 2:12.61 respectively. Landon Pestrue and Alex Hardy also had PRsin the 800. The mile was also dominated by the Sharks with Nate March, Aaron, and Ben March taking the top three spots. Ben  March was apparently having a great day, and had another with a time of 4:49.64. In the two mile, Ben March, Aaron, and Landon also got first, second, and third. The 4×8 team also took first with, you guessed it, Bowerman, Pestrue, and Ben and Nate March.

Michael Baysah placed third in the 400-meter with a PR. He said, “We came in ready to compete knowing that we needed to beat Hemlock. Even though I hate the 400, I knew I had to PR for me to beat the Hemlock runners.” Nate March also placed fourth in the event.  Conner Daniels placed 2nd in 300 hurdles, and so did the 4×1 and 4×4 teams.

Ben Dousuah stepped up in the field event, taking first in both shot put and discus, and second in long jump. Colby Taylor got a big PR in discus with a throw of 108-09, and Walker Aldrich placed second in pole vault.

Overall, it was a great day and another TVC win for both track teams.