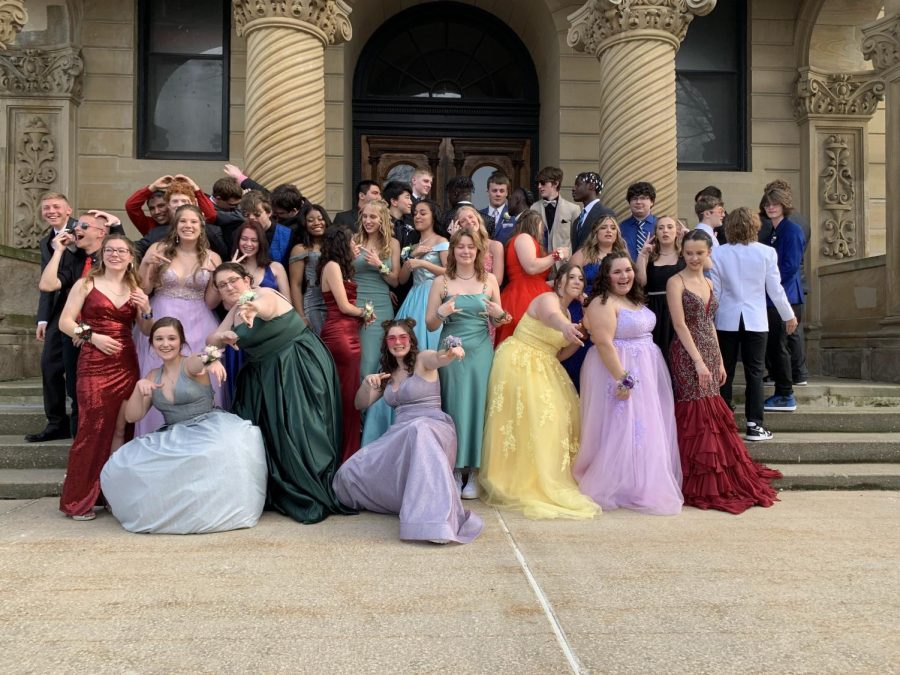 The class of 2022 poses for prom pictures.

Students spent the better half of their weekend prettying up and fussin getting their photos taken with friends and family. At the Ithaca Courthouse Senior Korah Honig had a few words about the new venue,  “Getting pictures was really fun. The courthouse was a cool new location compared to Leppien Park where we usually are. I think everyone got really great pictures, and I loved seeing everyone’s posts on Instagram.” Many people  thought this was a great idea and loved the venue.

The dance and dinner was held at Pins, where students and chaperones were able to indulge in some delicious home cooking. This included meatballs, salad, chicken alfredo, corn, and rolls. Junior Jenna able had a strong passion for the food stating, “The chicken alfredo was my favorite because the chicken was really good as were the rolls.”

Along with the fine dining, there was dancing as well. Nate March had a very strong opinion about the dancing stating, “The food was really stinkin good. The music was overall quite mid, and  I was quite disappointed when we “Don’t Talk about Bruno” came on. Despite the previous disappointments this was the best school dance I have ever been to.” Dancing wasn’t the only thing March was doing on the day as he was also elected prom king and his queen on the night was Gracelynne Shattuck. For the junior class, the prince was none other than the infamous Grant Bebow and the princess was Marlena Pestrue.

As the night winded down and the festivities came to an end, so began a torrent of smaller, more intimate after parties. One such after party was hosted at the First Baptist Church of St. Louis, where party-goers were invited in and served Root Beer floats to die for and other delicious delicacies. This is truly a night to remember.