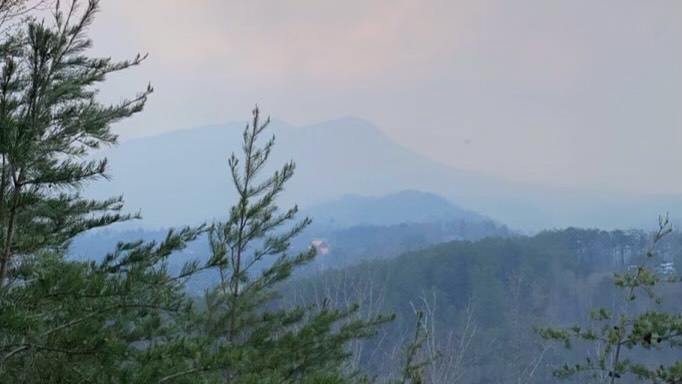 The smoky mountains pictured in the aftermath of the wildfires.

Many people around the country went to the scenic Smoky Mountains in Tennessee for their spring break trips, but it didn’t quite go as planned due to dry weather and high winds that caused wildfires to spread more than 4,000 acres.

The wildfires ignited Wednesday afternoon, March 30, 2022, while many people were on vacation. One student, Lilly Massaway, had her break cut short. She commented, “Wednesday morning when I woke up there was a forest fire a few miles from where I was staying. On my way to the caves in the Tuckaleechee Caverns, I could see the flames and black smoke from the mountain. When I got back to my cabin, the view of the mountains was almost non-existent because of the smoke from the fire. At 1:00 a.m. on Thursday I was woken up and told that we had to evacuate. The smoke was like a thick fog outside. While packing up the car, I could see the bright orange flames over the trees on the mountain a few miles away” Several roads between Pigeon Forge and Wears Valley were closed because flames were jumping the highway, which caused the fire to spread.

There was a press conference Thursday, March 31, that Sevier County Mayor Larry Waters spoke at. He said that the lessons learned from the deadly wildfires back in 2016 were “vital” in helping evacuate people from danger zones. He commented, “I believe the organization this time and the effectiveness of all of our firefighters, especially the effectiveness of the team we have in place that was directing all the activities — I couldn’t ask for more and better organization than we had.”

The Icon Dolly Parton is from Sevier County and sent out a tweet about the fires. It said, “It looks scary on TV, but I’m proud of how everyone in the area has pulled together like they always do. I’m especially proud of the brave men and women who are working to contain the fire.” She owns Dollywood, a theme park in Pigeon forge, and she said that everything was okay there.  “I know there are some folks who have been affected, and I hope that you will join me in saying a prayer for them,” Parton said.

Most of the fires have been extinguished, but fire danger is still very high. Thanks to the firefighters and crew in the area, there have not been any reported casualties.