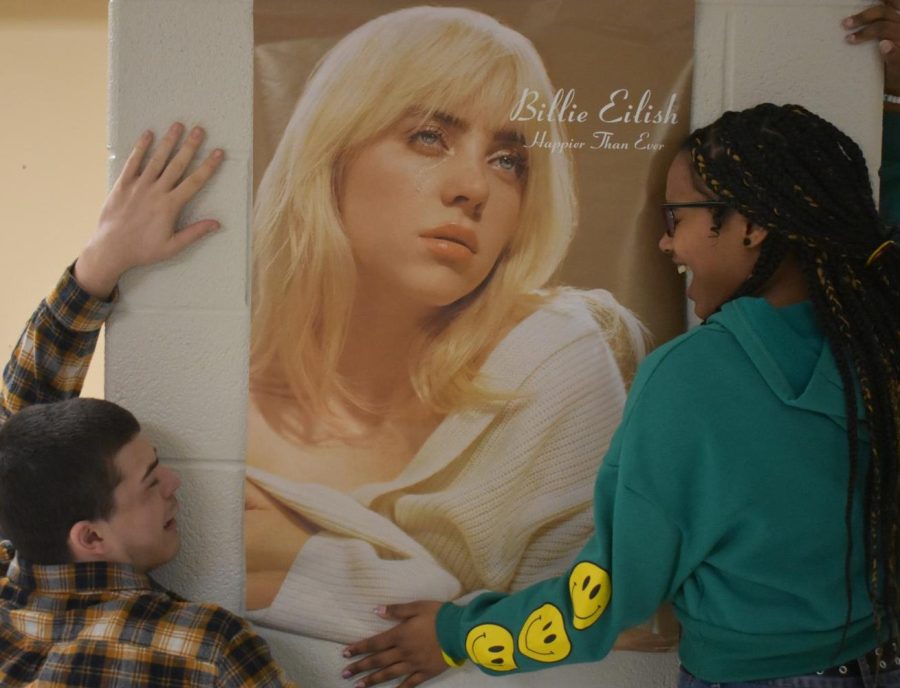 Two SLHS worship over the Billie Eilish shrine hanging up in senior hallway.

Billie Eilish is equipped with the music that everyone has ever wanted. With her recent album release back in July of 2021, fans have been swooning over her even more since.

Eilish rose to fame at the age of 13 when she and her brother Finneas O’Connell uploaded her first song “Ocean Eyes” to SoundCloud.

As a kid, Eilish grew up with music all around her. Her mom, Maggie Baird, an American actress, screen player, and theatre troupe, had an influence on Eilish’s music. Her father, Patrick O’Connell, who had taken up small roles in the acting industry in his early years, showed bestowed the love of music on to Eilish.

Even though her life seems luxurious now, Eilish and her family had to work hard for where she’s at now. Through, Eilish’s parents have appeared in many small roles, their chance of landing one wasn’t always guaranteed. Because of this, her mom became a teacher and her dad became a carpenter. Her mom would work very hard for Eilish to have experiences like gymnastics and dance class. For Eilish to be able to dance, her father Patrick would offer to use his carpenter skills to help around the studio, which would help pay for the lessons.

In Eilish’s house, it was a common rule that as long as her brother Finneas and her were playing and making music, they could stay up as long as they wanted. This helped stimulate the sibling’s love for music.

Because Eilish is liked by many, she has had a great influence on the world. Namely, a big influence— like the huge shrine of herself in the St. Louis High School senior hallway. The shrine included a huge Album cover in the center with pictures of her all around it with their favorite song printed out on top. This project was created by none other than Craig Bebow and Hunter Salladay.

Mikayla Haag, a junior at St. Louis High School, comments, “I thought this was an interesting idea. The first time I saw it I kind of had to do a double-take, and I thought it was funny. I’m actually not surprised that the seniors did it. They are a fun class.”