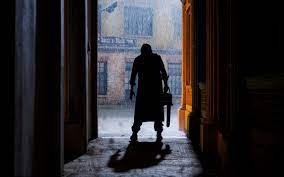 Leatherface lurks in the shadows, waiting for his prey to make their move.

The film maintains the claim of the massacre being based on a true story. Leatherface himself is inspired by Ed Gein, the ‘Butcher of Plainfield’, who is confirmed to have killed at least two people and robbed countless graves, using their bodies being to make clothes, furniture, and most notably masks– all of which inspired the titular chainsaw-wielding psycho.

It was 2013’s Texas Chainsaw which started the trend that this film continues by having Leatherface as a solo show. And he’s plenty more effective without his family holding him back.

A solo star isn’t all that this film borrows from its predecessor. In fact, both films feature a group of four main friends who are up on their luck, and in this case, the friends have bought an entire town; Harlow, Texas. Unfortunately for these teens, they didn’t buy every house; an old orphanage, as well as an auto shop, are still occupied. The orphanage is run by an old woman, and every one of her children have left… except for one. When the teens threaten to kick her out of her home, the woman collapses leading to her being rushed to the nearest hospital.

Her last baby tags along for the ride, and she doesn’t make it. Leading to the last child kind of losing it. He kills both policemen in the van, as well as one of the four friends who tagged along. He de-faces one of the policemen, leading to his return as Leatherface, and his lust for blood comes fleeting back to him. As can be guessed, Leatherface ends up massacring every single character in the film, except for one. He returns to his new home to massacre the remaining friends and all the investors they’ve shipped out to buy a stake in the ghost town.

Sally Hardesty, the sole survivor of the first film, returns as well to fight her foe from over 40 years ago. She is promptly killed by Leatherface after being built up over the course of the movie in strung-out scenes; this makes her entire character pointless. According to Cole Lombard, “I really liked the kills. It put the massacre in ‘Texas Chainsaw Massacre’. But I thought what they did to Sally was dirty. Like they brought her back just to kill her. And even that made no sense when she gets lifted up in the air and her guts ground by a chainsaw, yet still lives for like 30 more minutes.”

All in all, this film fails in doing nearly everything it tries to do. From its origins in 1974 to its present in 2022, this is likely the most mediocre film in the franchise. with it only being released on Netflix, this film will more than likely be forgotten with time. According to a viewer who didn’t quite like the film, “My favorite part was the very end when the main character gets killed in a jumpscare.”