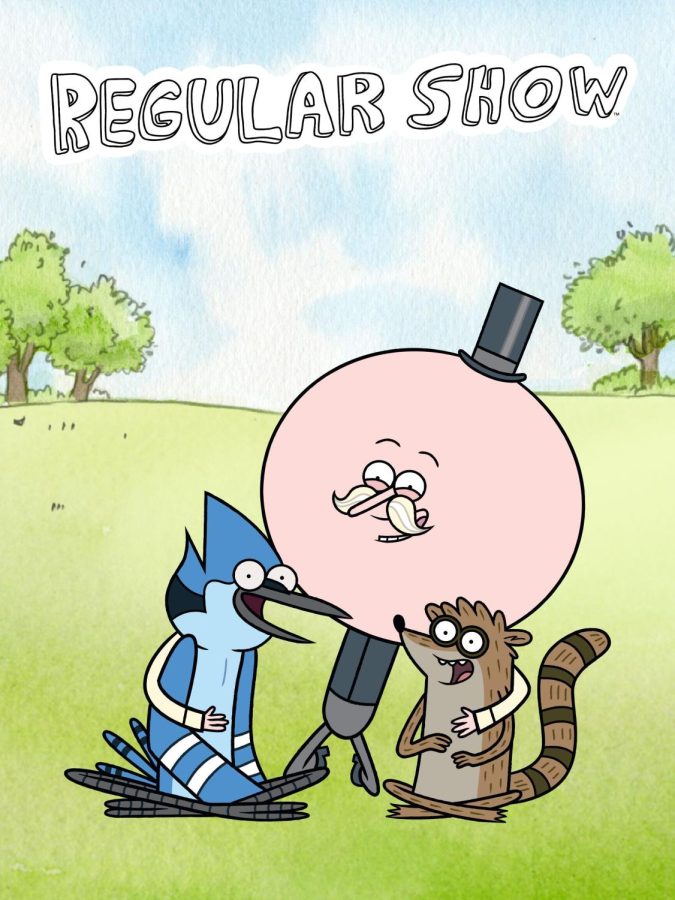 Mordecai, Rigby, and Pops hang out in their park.

Regular Show premiered in 2009 and displayed the misadventures of two groundskeepers, Mordecai the Bluejay and Rigby the Raccoon. The show, despite changing wildly over the years, has always stuck to the same formula; the two goons, the 23-year-old Mordecai and Rigby are presented with a problem. Mordecai and Rigby attempt to fix said problems by engaging in shady methods, more often than not leading to them having to save the world from some random monster or catastrophe.

The first episode, “The Power,” begins with Mordecai and Rigby wrestling. Mordecai throws Rigby against the wall, causing a giant hole to form in the wall. Instead of covering the estimated $40 cost to fix the hole, the two decide to use a keyboard they found in the trash which grants wishes. Rigby accidentally summons a monster and sends one of their co-workers to the Moon. According to Michael Hart, “My favorite episode is the second episode of the entire series, ‘; Just Set up the Chairs,’” When, instead of setting up chairs for a birthday party, they play an evil arcade machine. This leads to a giant demon head terrorizing the entire park. “I like this episode most because the main idea is that Rigby is a button masher while Mordecai has the actual skill, but they have to work together, with the help of fellow employee Skips, to beat the unleashed evil.” Said Michael Hart.

Evelynn Gutierrez shared, “My favorite episode is “Bet To Be Blonde”, in which Mordecai loses a bet and has to dye his hair blonde.” Mordecai is at first humiliated by this, then finds a gang of blondes who travel around judging anyone who isn’t blonde. Gutierrez continued, “I also really like the episode “Temp Check”; Rigby is too lazy to do anything, so he hires a replacement to do his work for him.” Little does Rigby know, the temp, Doug, is slowly taking on traits of Rigby’s until the otter completely replaces the raccoon. Yet no one can top the undisputed best episode of the entire series; “Weekend at Benson’s”. In this episode, Mordecai and Rigby accidentally knock Benson out. They attempt to take him to his apartment, in hopes of tricking him into thinking it was all a dream. They run into Benson’s love interest, only for her to invite him to a party. Mordecai and Rigby are forced to pretend Benson is awake and well for the entire party, which is even harder than it sounds. Benson’s Girlfriend’s ex is there and Benson has to be cool and show him up while being unconscious the whole while.

All in all, this show simultaneously portrays a realistic world, as well as a world where anything and everything could happen; and that’s what’s great about it. Everyone can relate to the characters and their struggles until the entire thing turns world-threatening.