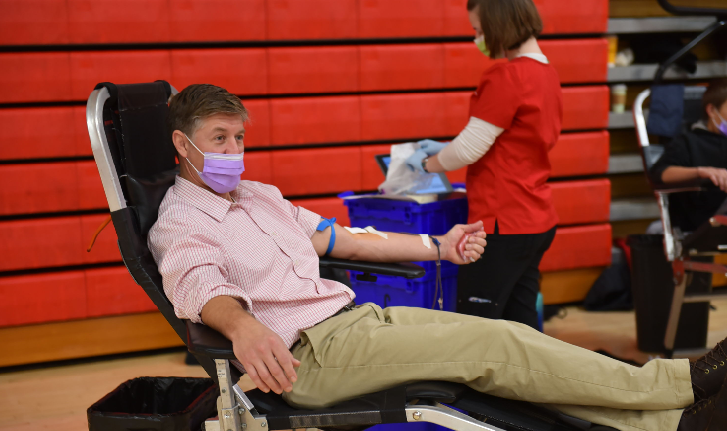 The annual St. Louis blood drive was held on Nov. 30, in the gym and 28 participants resulted in 28 pints donated.

The Versiti Blood Center of Michigan administered the blood drive, and this was the first year that SLHS National Honors Society was in charge. In the past, it was always run by the anatomy class. To make it easier, NHS students were split into different committees.

Mrs. Bush-Grabmeyer is one of two teachers that stepped up as a NHS advisor after the last two left. She said, “Being that this was the first time the NHS sponsored the blood drive, I felt we did a good job supporting Versiti and giving back to our community.  We learned a lot about the process and are ready to make some changes for future blood drives.  I was very proud of our students who were willing to give time, food, and blood donations for a greater cause.”

The donor committee signed up many students and community members to donate blood. The food committee was able to secure donations from several local restaurants, including McDonalds, Main Street Pizza, Hearthstone, and Meijer. This allowed donors to have a snack and a drink after they donated. Other members of the committee provided snacks as well.

First time blood donor Allison Onstott commented, “I wanted to give blood to give back and help people in need. I was really nervous because it was my first time giving blood, but it wasn’t bad at all.”

They were able to collect 28 donations, and many other people attempted to donate. According to Versiti, the donations will help to save the lives of 84 people. There were more donors signed up, but Versiti was short staffed, so not everyone was able to donate. Still, it was a successful blood drive with 28 donations collected!