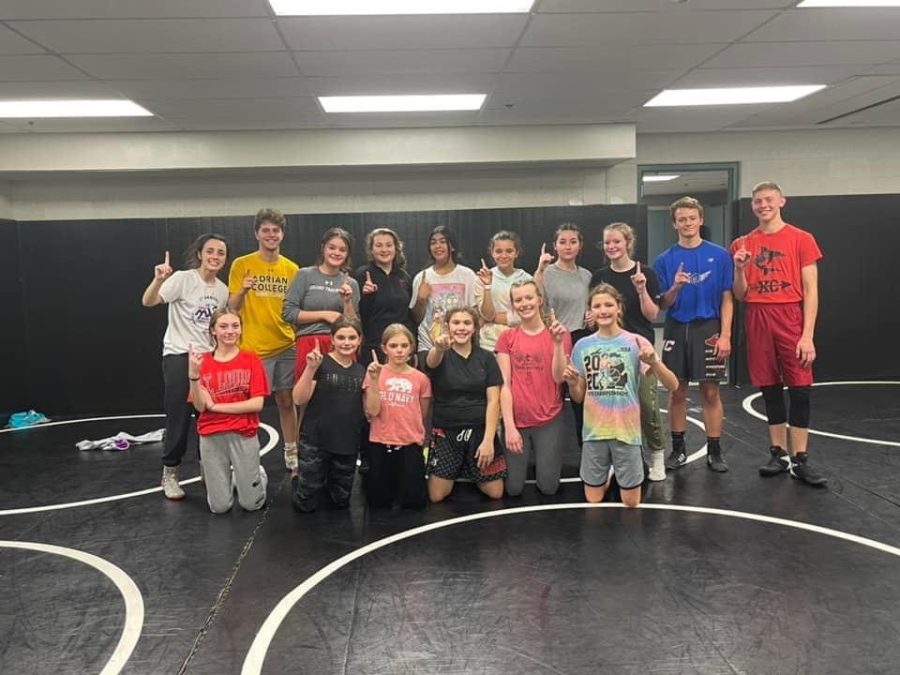 The Girl's wrestling team poses together after their first practice at SLHS in the wrestling room.

For the very first time in St. Louis High School history, there will be an all-girls wrestling team joining the roster, coached by former SLHS student and wrestler Modestie Hitchcock.

According to an article by Detroit Free Press, the MHSAA stated, “401 girls competed in wrestling in 2019-20, up 151 from the previous school year.”

Being such a new program, it’s expected that some girls question whether joining the team is right for them. Hitchcock stated, “My first piece of advice to any girl even interested is to try it! Come in to practice and at least watch. You’ll never know until you try it. Girls Wrestling is one of the fastest-growing sports so the opportunity needs to be taken advantage of. Being a part of this sport is amazing because it not only teaches qualities such as responsibility, work ethic, and discipline, but the team has an incredible connection– one might say a family. We’ve been practicing for two weeks and the connection the team and I have already created with each other is irreplaceable.”

Freshman Navia Navarro, who joined the girl’s team this year stated, “I decided to join the team because when my dad was younger, he joined wrestling in middle school. He always wanted me to do it but I was always scared because I thought it was a boy’s sport. I finally came out of my shell and tried it out and I have been really enjoying it so far!”

Navarro has loved her experience of being on this team. She added, “So far, my favorite part of practice is when we wrestle at the end of the practice, it’s like a way of getting your aggression out. I have a few goals I want to achieve by the end of the season; I would like to get mentally stronger, instead of saying I can’t, I want to be able to say I tried and gave my best. I also want to get physically stronger and to have a healthier habit of things that I enjoy. Overall, it’s been great making history as a freshman at SLHS, it’s a very proud moment for the program.”

Something to also take into consideration is the fact that this is once again SLHS’s first-ever girls wrestling program. Even if students are a little scared or nervous to join, just go for it! Female students can become a part of making history here at St. Louis!

Hitchcock added, “Being a part of the first-ever all-girls wrestling team here at St Louis is an honor and something I take a lot of pride in. I’ve wrestled my whole life and continued my athletic journey in college, but once it came to an end due to an injury, I knew I had to spread the love and passion I had for the sport, but I never expected such big numbers for a first-year program. Having 16 girls with seven high schoolers is amazing and definitely is something to remember. I’m hoping from here this program grows exponentially each year. I think the girl’s program will bring big numbers to the program as a whole as well as bring success on the mats.”