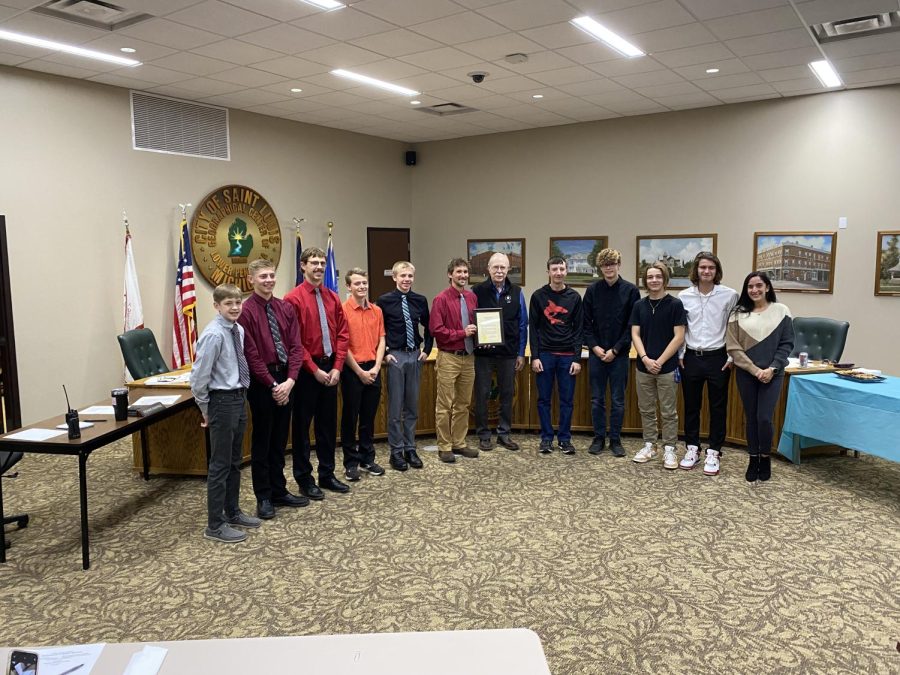 The SLHS Boys' Cross team stands with the Mayor of St. Louis, after he proclaims Nov. 16th Boys' Cross day.

This proclamation has been given out with due warrant since the team has made such significant accomplishments this season. They’ve had an undefeated division three-season, reclaimed their Tri-Valley Conference title, and most remarkably, successfully defended a state title. Coach Puffpaff described the team, “With a target on their back all season, the team continued to overcome obstacles and perform at their highest level together.”  This team has been through a lot together. Not only at practice but also afterward.

This year has been unusually trying for the team as even before the season began, things were tough. During the pre-season Rifle River Cross Camp, the boys spent a week in the wilderness with six other teams. Many bonds were made that week and unfortunately, the day after the camp ended, a friend they made from camp, Trent Carter, lost his life. Carter was a lighthearted jokester, who the team grew quite close to.

Just as the team seemed to recover, a key member of the team showed up to practice the day before a meet only to tell the coach that he would be quitting. The next day the team got up as normal, leaned on each other, pushed through the race, and took first place. Later, this teammate would come back and help the team win both a regional and state title.

Sophomore Ben March stated, “I feel as though the accountability of this team is unequaled.” That is what separates this team from others– their ability to put in the work when things get hard. With such potential and work ethic, it’s exciting to see what the team pulls off next year.