Izabelle Hrabal continues to put up a fight even after two major knee surgeries! 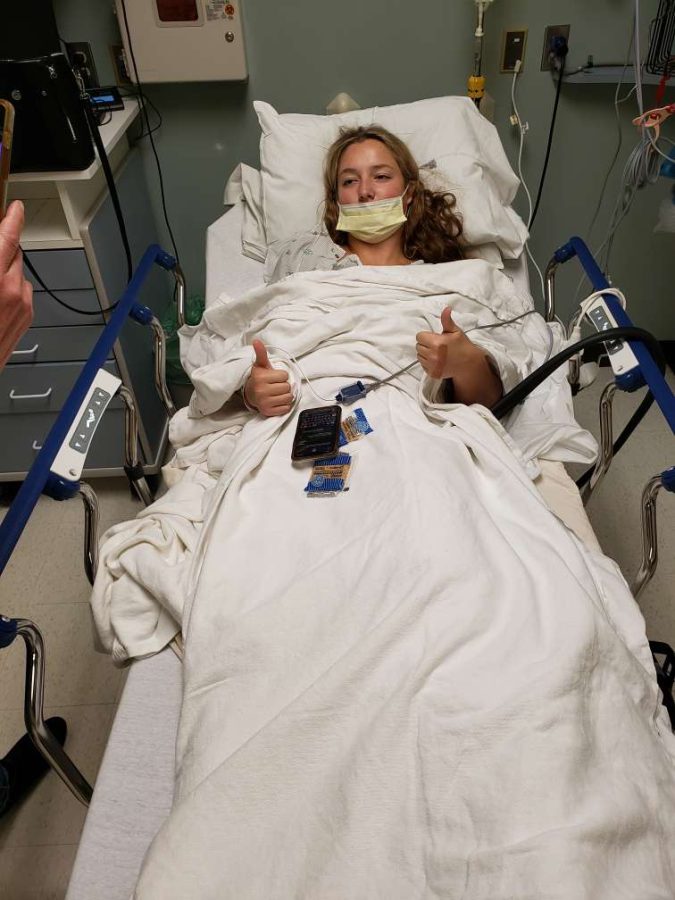 Izabelle Hrabal lays in her hospital bed after one of her major knee surgeries.

Izabelle Hrabal, a junior at St. Louis High School has had two major knee surgeries all within a year and a half. Even though it is crazy to think someone so young would have to have double knee surgeries, it is pretty cool to see how Hrabal is handling it. Not many teens have to go through such a big medical change. This was a long process for Hrabal. After surgery, there is a lot of rehab and working out involved.

Hrabal’s first surgery was to repair her ACL that was completely torn. They used graphs of the hamstring in her leg to make a new ACL. For the second surgery, they had to sew her meniscus back together along with repairing her other ACL. They put a tendon from a cadaver in to make sure everything stays stable.

In order for Hrabal to get back to how she was, she put a lot of time and effort into rehabilitation. However, things like this normally take a while, she will be strong and healthy within the time of keeping up the great work! Hrabal being so young should help with the healing and restoring the strength in her knees.

Normally people think or worry about how their surgery is going to go or come out of surgery. Not Hrabal. She said, “I was mostly worried if I was ever going to be the same getting back into sports.”  This goes to show the dedication that she has for not only her sports but also her teammates. Even when she could not play because of an injury, she would still show up to support and cheer her teammates on.

Hrabal had many people by her side on her road to recovery– two of them being here at SLHS, Ashlyn Breen and Payton Kuhn.

Breen said, “She’s helped me realize to always give it your all, even when you may not physically be able to.” With Breen and Hrabal being side by side along her journey of recovery, it has brought their friendship even closer. Whenever Hrabal needs a friend to talk to, Breen is always there to help.

Even though it might not seem like a lot, Breen and Kuhn sticking along her side will give her the mental strength that she needs to be able to get back one hundred percent after her second consecutive ACL surgery.