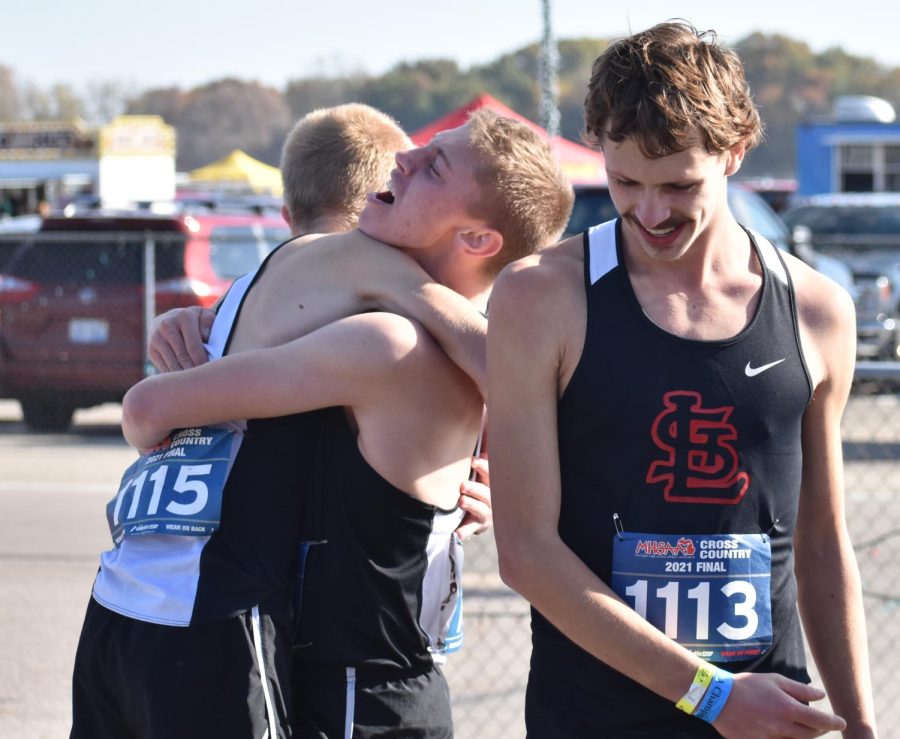 The Shark boys’ haven’t lost to a single Division 3 team all year long. This achievement showcases the tenacity and determination of the team.

Senior Nate March stated, “Well it was evident throughout the entire season that we were able to compete at a high level.” The girls’ team also ran well, finishing an unbelievable sixth place, which is the fourth time in a row the lady Sharks have placed top 10 at the state meet. Senior Libby Munderloh stated, “It has been a long journey to get to this point with a lot of physical and mental obstacles on the girls team, but we’ve had a lot of growth and came out on top of the adversity we faced.”

Of course all the running is done by the athletes, but without a seasoned coach there to guide and mentor these young ladies and men, who knows where this team would be? This coach is Jay Puffpaff, who had a few words of his own about the state meet performances: “It was an unbelievable day for our athletes. They’ve worked for years to put themselves in position for this opportunity; they embraced the moment and ran their best performances. It takes a special group to accomplish the things these teams have done.”

To fully understand the weight of this year’s accomplishments, one must take a step back to the 2020 cross country season, when on a scorching hot Nov. 7, the fifth ranked St. Louis guys team upset the reigning Hart champs to secure a fantastic win. Since then, the Sharks have been on everyone’s radar. The team even attracted the attention of Channel 12 News before the race started. It’s one thing to be champs, and it’s another to live up to the title, especially with a team that lost three senior varsity members. With a lot on the line, two freshmen, and a state watching, the Sharks buckled down and went to work throughout the season– never once letting another team contest the legitimacy of the state champs. This being said, winning isn’t the only thing holding the team together,Junior Dylan Marr stated, “This team is a family, win or not we’ll be here for each other. ”

Though the records may show triumphs, every race is a war, and every mile a battle. Through the first mile, the Sharks were down 47 points from the lead. Without hesitation, the team dug in for the next long battle driving forward. When the Sharks fifth runner came through the two mile, they were only a mere three points away from first. Locking in, and giving it their all in the last mile, the Sharks were able to put away the rest of the field finishing 42 points ahead of second place. This team has a lot to celebrate: three all state runners Nate March, Ben March, and Aaron Bowerman, three straight regional titles, back to back state championships, and five returning varsity athletes. A loss of two seniors will be a hard pill to swallow, but if any team has the guts for it, this one does. Shark fans, be on the lookout for a three-peat. St. Louis won’t give up it’s title without a fight and you can bet on that.