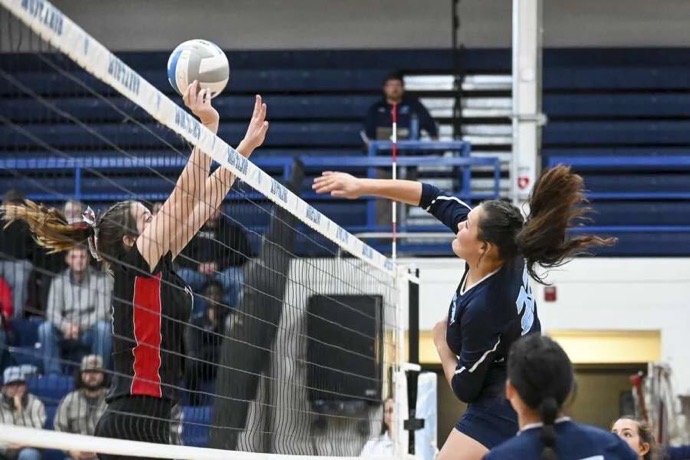 Phoenix Shaw sets up a block against Sanford Meridian.

The Sharks were pumped going into Wednesday night, with the mindset of leaving it all on the court. They had been preparing since their last conference game for this night. They knew going in that their biggest obstacle would be having to go against heavy hitter Izzy Dunn.

The Mustangs ended up winning in four matches 26-24, 25-22, 24-26, 25-17 to take the Michigan High School Athletic Association Division 3 district semifinals. Every set seemed to play out like a game of tug-of-war, where each team never seemed to pull ahead by more than several points. The first set was very close. It ended up being 24-24 but Meridian pulled through with a kill on top of a St. Louis erro.

Dunn, who isn’t used to teams being able to block or pass up her hits, seemed put-off in the first set, only gaining one kill. She seemed to pick up her momentum in the second. Both Meridian and St. Louis went back and forth until Dunn clinched five kills in the end to earn her team a two-set lead.

St. Louis turned it around in the third set with a 12-5 lead. They fought back and forth as Meridian slowly caught up, but they never quite did as Senior hitter Korah Honig had six kills near the end of the set.

The fourth set was a good effort by St. Louis, but it wasn’t quite enough. Meridian gained a heavy lead with seven points, including two kills, and two aces to bring the score to 22-12. St. Louis kept fighting and playing hard until the end, but the gap was too wide.

Throughout the night, it seemed as though St. Louis and Meridian battled back and forth with hard hits. Meridian’sDunn had 23 kills, and St. Louis Honig had35. According to an article by Midland Daily News, Meridian Coach Smith said, “That No. 9 (Honig) is really good. She’s a nice matchup for Izzy; they’re both intelligent with their game, and they both pick blockers apart, and it was fun to watch those two battle.”

Sophomore Lauren Gager came to support the Sharks. She commented, “I believe they fought their hardest, and they fell short. It was really sad watching Ellie [Her sister] for the very last time but I’m so happy because she played really good. I think a highlight was definitely when you guys would get blocks and when you [Honig] got those super amazing digs.”

On the night, Honig had 35 kills (tying the school record for the most kills in a best 3-out-of-5 match), 12 digs, 4 blocks, and 3 aces. Setter Alexys Rodriguez had 42 assists, 8 digs, 3 kills, and an ace. Leading the team with digs was Ellie Gager with 13. Also contributing was Kiersten Francisco with 9 digs and 5 kills, and Pheonix Shaw with 7 kills, 2 aces, and 2 digs.

The season ended with heavy hearts as the team would be letting go of a whopping seven seniors, and it was a tearful goodbye to the sport that these girls came to know and love. They were able to leave with heads held high, as this game was hard-fought, and Meridian’s win was definitely not handed to them. Next year’s senior class will also have seven girls.