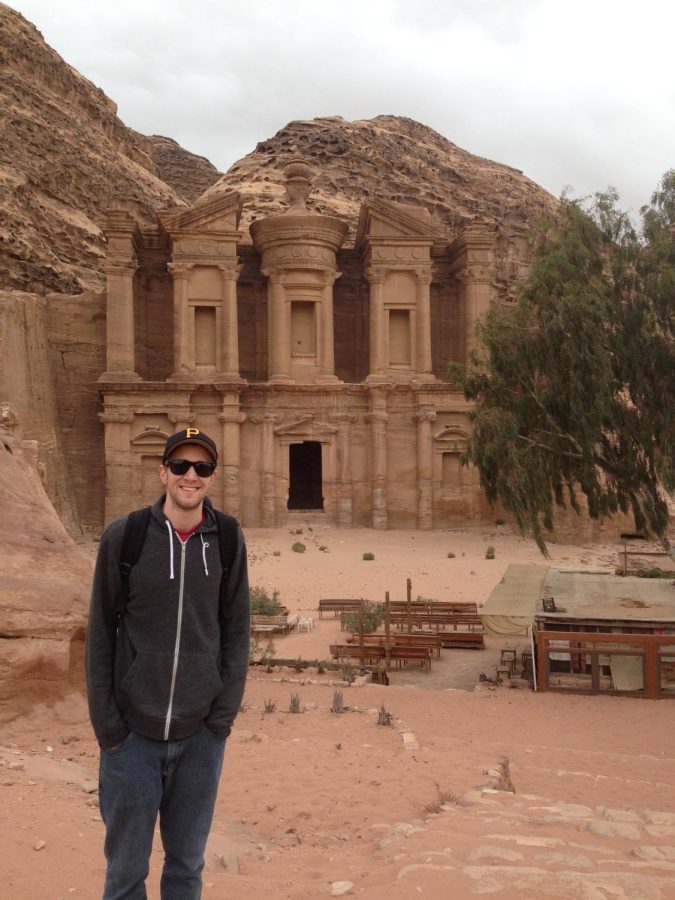 Kyle Deuling poses on one of his many adventures as he prepares to take on SLHS boy's basketball team.

St. Louis basketball recently welcomed a new coach for this upcoming season. Kyle Deuling has been hired as the new head coach for the boy’s varsity basketball team!

Deuling received his undergraduate degree in secondary education in History and English, from Grand Valley State University, and his Master’s in Higher Education Administration from Central Michigan University.  After graduating from undergrad, he and his wife moved to Kuwait (in the Middle East) to teach at the American International School of Kuwait. While living in Kuwait, he taught high school English and philosophy.

After Kuwait, Deuling accepted positions at the International Community School of Addis Ababa in Addis Ababa, Ethiopia, of which he worked for two years teaching high school English, creative writing, journalism, and philosophy! He has traveled a lot in his life (lived in four continents to be exact, including: North America, South America, Asia, Africa) and considers traveling one of his biggest hobbies. After leaving Kuwait, Deuling accepted a position at Central Michigan University advising, planning, and orienting students who will be studying abroad.

Deuling has a ton of experience in coaching and teaching! He has experience in teaching at elementary, middle, high school, and college levels. He has also coached teams at youth, middle school, and varsity levels. While coaching at international schools abroad, Deuling had the opportunity to travel with his teams to international tournaments in the Middle East and Africa for both soccer and basketball.

Deuling is very excited for this upcoming season He states, “This season, I am most excited to get to know the team, the school, and the community.  I am excited to get to know the players and student body so that I can use my diverse experiences in life to benefit the future aspirations of any St. Louis student.  As this is my first year on the job, and I haven’t had the luxury of watching the team play, I am excited to get in the gym, hear the balls bouncing, voices echoing, and see what potential can be unlocked in the players.  Having experienced coaching in international schools, I am excited to witness some Michigan-specific student/player experiences such as a full gym of fans, away from crowd support, Friday primetime games, and a concerted commitment from all the players to improve.”

Senior Demetrius Alspaugh said, “I am looking forward to this season and for Coach Deuling to coach my senior season of basketball. I’m excited to see what he will bring to the program. I’m hoping it’ll be a season of a lot of fun and improvement! I’m hyped!”

Deuling also added, “The goal setting for the team will be collectively established by myself and the players after the team is selected and we are able to get to know each other better.  Long term, my goal is to make St. Louis basketball respected by stakeholders in the community, and feared by our opposition.  I want to provide the players with an opportunity to transfer successes from learning and competing in basketball to other areas of their life to make them more productive individuals and citizens.  I want the players to be able to expand their basketball knowledge, incite curiosity and inquiry, and have fun challenging themselves to reach their full potential.”

Overall, Deuling is very excited for this season and the ones to come. It will be exciting to see what he’ll bring to the program!