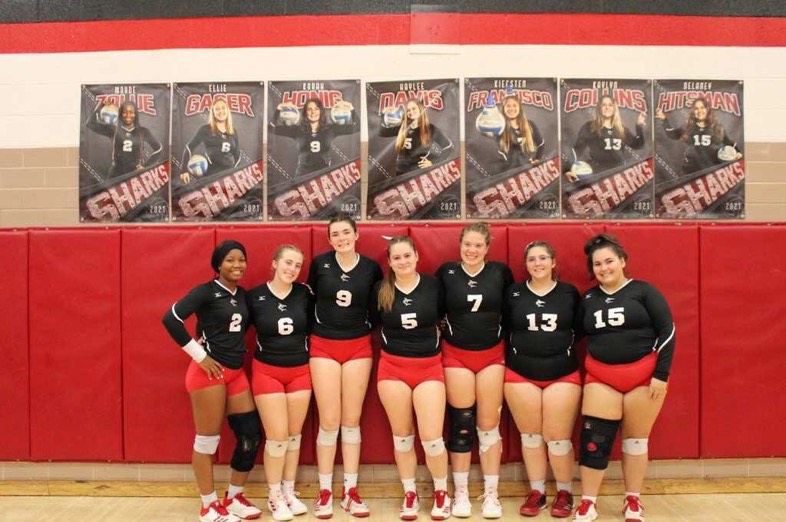 SLHS Varsity Volleyball team poses for a photo after their win against Standish-Sterling.

The St. Louis varsity volleyball team competed against Standish-Sterling on the Sharks’ home court– the Shark Tank, Friday, Oct. 27. They won all three sets with scores of 25-18 for the first set, 25-13 for the second, and 25-19 for the third.

It was senior night for the Sharks, and the last time they would ever play in the Shark Tank.

The starting lineup was made up by seniors Kiersten Franciso, Korah Honig, Kaylyn Collins, Haylee Davis, Ellie Gager, and Maude Zolue. Delaney Hitsman was also supposed to be a part of the lineup, but she sat out due to injury.

Senior Ellie Gager said, “It was a really bittersweet moment for me playing in the Shark tank for the last time. I was so excited to go out on the court and crush it for senior night but at the same time I was extremely sad it was my last time. I was really happy how we all played as a team on our last home game. We all played so great! I couldn’t be more proud of how we all played together for our last conference game. As far as winning goes, I think it was a really great thing that our team needed. I was so excited the whole night and just overall had such a fun time! We are now as confident as ever and ready to crush it at districts next week!”

Collins stated, “Walking onto the court and playing for the last time in this gym made me very sad. As I played my very last home game I just kept looking back on all the great memories. I am sad that playing in this very gym is over, but I’m ready to go onto district semi-finals in Meridian. I’m honestly ready for my life to continue and make plenty more memories.”

Overall the team is 4-5 in the conference so far.

The Sharks next compete in district semi finals at Meridian.