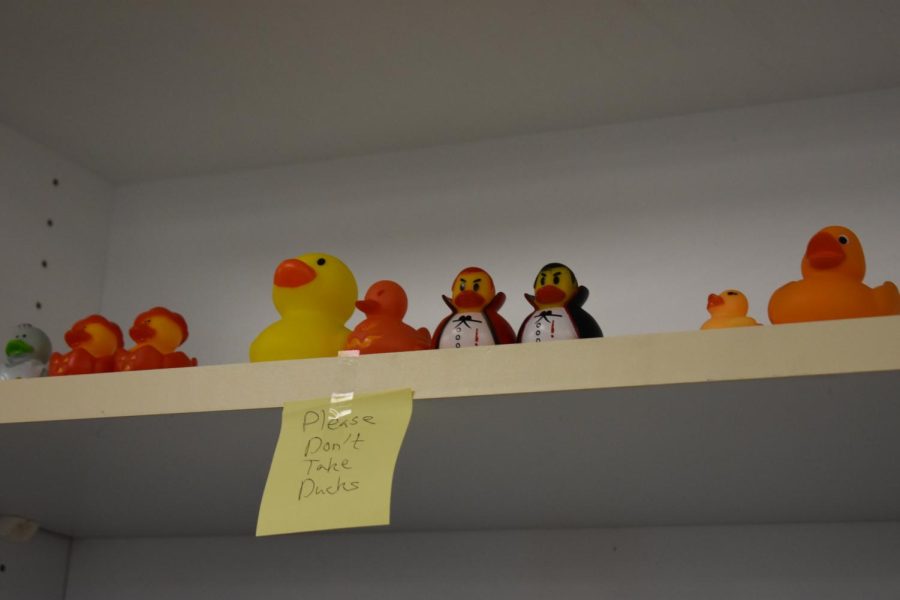 This photo shows a small part of Mr. Bunce's rubber ducks collection that can be found displayed within his classroom.

Walking into Mr. Bunce’s classroom at St. Louis High School students may notice the numerous rubber ducks scattered around. How did they even get there one may ask? According to, Bunce, a student, recently gifted him the miniature rubber ducks. These rubber ducks made their way around to students and staff in the building. It is known that Mr. Bunce loves and enjoys his rubber ducks so much that he even decided to get Halloween ones for his room!

Now, many people are probably wondering what is the story behind these little yellow squeakers. Well, it all started with Alex Hardy who would talk to Mr. Bunce about giving him about $600 so he could buy this huge rubber duck that stands about 8 feet tall. Mr. Bunce replied to him that he definitely could not afford to buy Hardy, his rubber duck. The two continued to banter, the next couple of days. Hardy thought it would be a great idea to bring Mr. Bunce his own personal rubber duck. This was the beginning of the adventurous tales of the rubber ducks. Later that day, Carson Butcher decided they wanted the rubber duck Hardy gave Bunce a name. They named the duck Peter. Peter started the trend of rubber ducks in Bunce’s classroom.

The next thing Bunce found there was a blue duck, and then Butcher came in with a bag of a bunch of mini ducks all for Bunce. Butcher and Bunce decided they should line the ducks all over the room and on the turn-in baskets. When students started asking if it would be okay if they took one of the miniature ducks Bunce told them that they could all take one. Suddenly, they all disappeared and have made appearances around the halls of SLHS. “Honestly, it’s something different, something that makes the classroom unique that makes it fun and enjoyable I think. Plus, since I am new it’s a tradition the students got to start that I’m sure will stick with the room for some years to come. It’s a way of them leaving their mark and making the classroom their own,” said Bunce.

Now Bunce has a collection of the original duck Peter, the blue duck, a bigger rubber duck named Bunce Jr, some of the miniature ducks, and his brand new Halloween ducks.

Bunce expressed, “As for the more decorative ones, I was never much of a crafter so getting ducks that had themes seemed like a fun idea. Therefore, I bought some Halloween ones to brighten up the room a little bit. The students seemed to like them so I think I’ll be getting more themed ones as more holidays come up.” Bunce’s favorite duck is all the ones that his students bring him. He believes that his students truly enjoy seeing and also having the rubber ducks in his classroom.

Evelynn Gutierrez stated, “I love the ducks so much, and I think they are super fun. However, I don’t like how people were taking advantage of his kindness.”