A world class traveler is a well-known substitute at SLHS 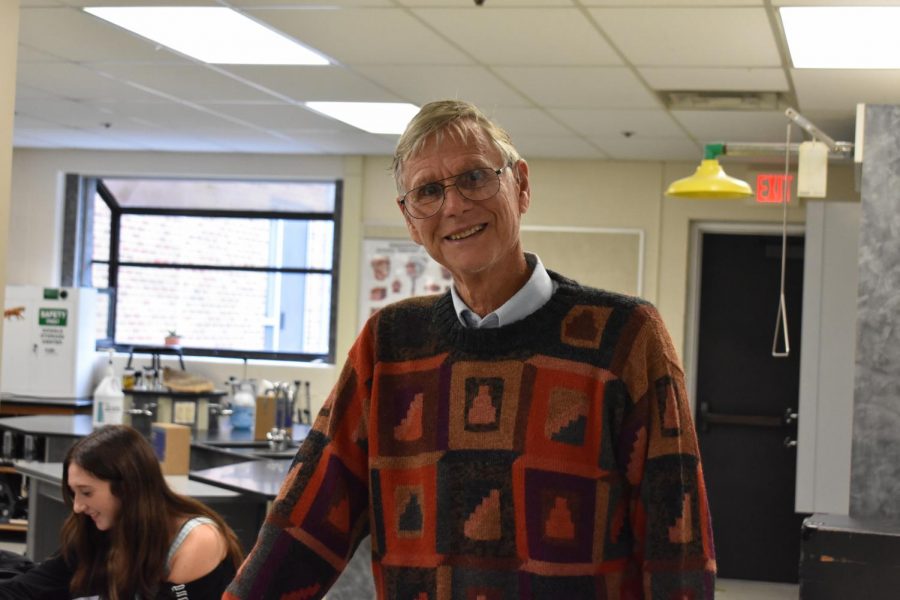 Mr. Taylor poses for a photo in one of his well-loved sweaters!

Mr. Taylor is a sub here at St. Louis High School and also a world traveler.

He has been traveling since he was 19. When he had hitchhiked from Mexico to Mt. Pleasant. Traveling is what he loves.

“I did most of my traveling AFTER age 50,” said Mr. Taylor. As he stated it he has been traveling the world for many years, but it did not really become a main thing for him until he was in his 50s.

There are 197 countries in the world, and Mr. Taylor has been to 45 of them. Out of all of those countries, he doesn’t have a favorite. He stated, “ Every country has something to offer and a different experience.”

Tanzania was a good trip. When he saw 1000’s of animals as far as the eye could see.

On the other hand, some of his not-so-good experiences were when he went to Ghana and Egypt. He got robbed in Ghana and said the people of Egypt are nasty.

Prior to being a sub, he had two other jobs. The first one was a warfare frand in vertigo tor for 31 years. Then he taught night school, which is an adult education class for seven years. Then he became a sub after retirement. His work history goes to show that he is a committed and trustworthy educator.

The one thing he loves the most about subbing is showing all the kids the things he bought on his travels. Some of them are photos that come with amazing stories, and other things like little nick nack things that have amazing history and Culture. Some might wonder why he chose to come to St. Louis to sub? Well, the answer is, the kids are great, kind, and like to hear about his travels.

Freshman Oliva Bartlett said, “He (Mr.Taylor) is a very generous and adventurous person.” He is generous in many ways, but one is by letting students look and hold onto some of his things which share his stories with people that might never get to travel the way that he does.

Another student, Lauren Devine said, “I think he is very brave for traveling to all the places that he has gone to.” Other students love Taylors sweaters. They fit him so well and some are up to 20 years old. He mainly purchased them in Saginaw but also in Pera, which is in Turkey.

He is a man of adventure, curiosity, and is a little crazy. This all started with him investing his earnings in the stock market. Then He bought rental properties. This helped with the amount of traveling, since it costs so much. Ironically, It actually cost less to purchase a plane ticket outside of the United States. It would cost him more money to travel inside the U.S.A. than it would fly from Africa to America.