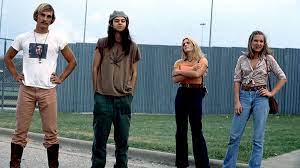 Dazed and Confused cast poses for a set photo

What happens when you cross nervous freshmen with seniors who just do not care anymore? You get a movie that is quite “all right, all right, all right.”  The movie Dazed and Confused was released 1993, and quickly became a classic to those who viewed it at the time. It, of course, featured Matthew McConaughey in his first feature-length film. Dazed and Confused also featured the two words McConaughey’s most famous for saying, “All right.”

At its core, the film is about seniors who have no idea what they are doing with their lives. The film also features freshmen getting berated by those seniors. And of course, who could forget the infamous paddles, which the seniors use to haze the incoming freshmen. Michael Hart shared, “I definitely would haze incoming freshmen. They don’t deserve it, but it’s just a part of the initiation.” While the film was released in 1993, it takes place in the 70s, and is still relevant with today’s populace.

The movie mainly focuses on incoming freshman, Mitch, as he attempts to make his way through the final day of school un-paddled by vicious seniors. Yet that is not all, the movie also focuses on multiple groups of friends slowly coming to terms with the fact their best days are over. The movie is remembered as an instant classic to many. It’s not only a comedy, but a film about what it really means when the best and worst years of your life are over. The end of the film spells this out for viewers, with one of the many main characters reflecting on his years at the school, “After all this is over, I just wanna be able to say I did the best I could with the time I was given.”

No one wants to be paddled as a kid. According to sophomore Danielle Thelen, “I would definitely not want to be paddled as an incoming freshman, and I would definitely not paddle them myself. I’m pretty sure that’s illegal on so many levels.” A sound and fair argument to be sure. The law would most definitely not allow the seniors to paddle incoming freshmen. Cole Lombard shared, “I would probably start a revolution, make it so freshmen haze seniors.” Lombard continued, “But then again, I’m not a freshman anymore so I don’t really care.”