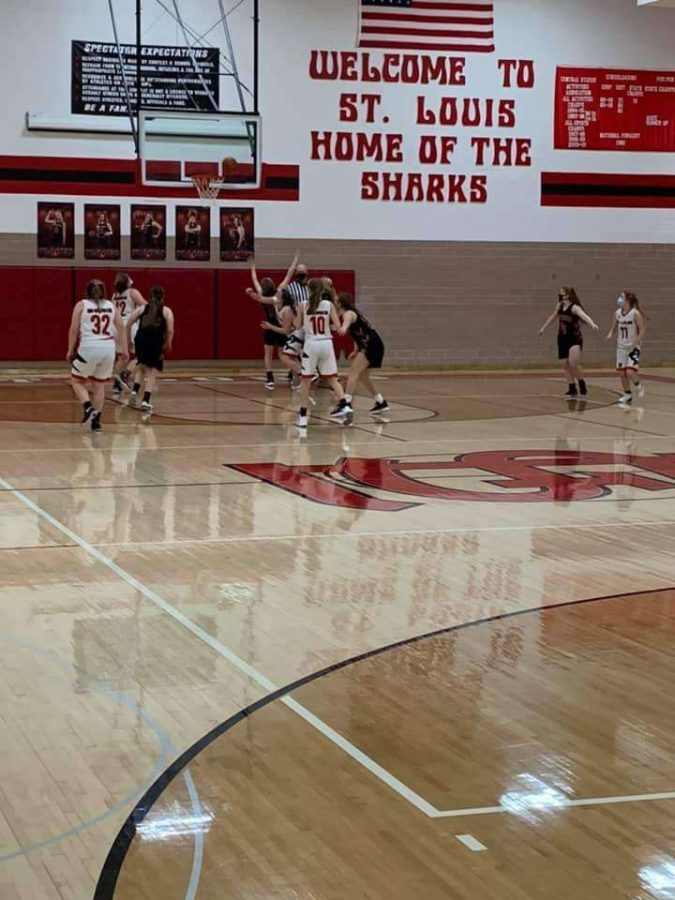 Lady Sharks push through to pull of a win against the Vestaburg Wolverines.

The St. Louis girls basketball team competed against the Vestaburg Wolverines at the Shark Tank Feb. 15, 2021. The Lady Sharks ended up pulling off a last minute win with the score being 27-26 at the end of the fourth quarter.

Mikaila Borie is currently the starting point guard for the team. She commented, “I think as a team, we played pretty well and our communication was decent. I wish we could’ve scored more points in the first quarter, but the most important thing is that we managed to pull off the win. I’m looking forward to what this season will bring our team, and we still have a lot of things to work on overall.”

The girls struggled throughout the entire first half putting up very little points. Delainee Zacharko mentioned, “We did not play as well as we wanted, but we pulled through. We played very well as a team and had decent communication, but there are still things we need to work on. The first quarter was one of our struggles of the night since we were unable to score very many points.”

Kiersten Francisco led the Sharks with nine points and 10 rebounds, while senior Macie Sallady came off the bench for eight points. Monika Borie had six assists to go along with six points.

The Sharks competed again away at Standish-Sterling Central HS on Feb. 17, 2021. Unfortunately, the girls took a big loss against the Panthers with the final score being 12-56.

Macie Salladay mentioned, “We tried our hardest, and we didn’t end up communicating as well as we should have. The bench did well hyping up the players, but we ended up losing in the end. I hope that we can overcome our challenges and win against Valley Lutheran.”

The Lady Sharks are back in action Feb. 19 away at Valley Lutheran with the game starting at approximately 7:30 P.M.