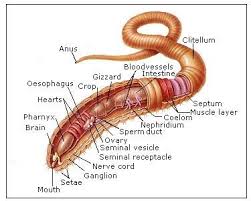 The students learned about the anatomy of a worm during the dissection.

When dissecting a worm, students are supposed to lay it dorsal side up. After that, they should begin cutting gently down the center of its body and begin pinning the sides down to reveal the interior. Following that, students must carefully analyze what is inside. This was facilitated by Mrs. Dubridge on December 21 in her biology class.

Mrs. Dubridge decided to do a worm dissection with all of her biology classes. It was very unexpected and appreciated by all the students. According to Grant Bebow, “It was difficult at first but then it was easy, and it was fun.” Many students also seemed to find it difficult at first, but most agreed that it was refreshing from all the work. As Mrs. Dubrige said, “Science without labs, is just nonfiction reading”.

Mrs. Dubridge wanted to do the lab to add some fun to the classroom since there aren’t many opportunities to do so anymore because of Covid-19. According to her, “Dissection is so important because it gives students an appreciation of how complex living organisms really are in a total hands-on, discovery-based learning environment.  Anything students can do instead of watching someone else do it is SO important.” She then went on to say, “It builds confidence for students who didn’t think they could do it and although we have a large number of hunters/fishers in the area, this is an activity that some students have never had the opportunity to experience before.”

An experience it was. Jenna Abell felt very excited and ready to do something that would have a good life lesson and be less boring than reading out of a textbook. According to her, “It was really fun, and it was cool to learn how hard or soft you have to push with a scalpel. It was refreshing to learn about something hands-on.”

Learning hands-on is almost considered something of the past across America today due to the spreading virus and lack of in-person school.  Luckily, with the few days that students have to be in-person, they can make the most of it.