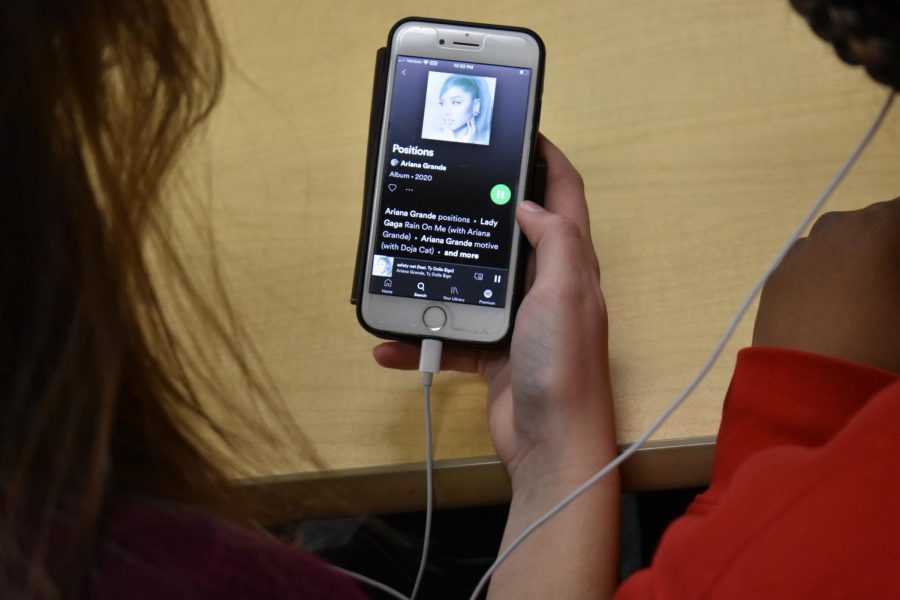 Old Victorious star, Ariana Grande, finally released her sixth album October 30th. Many people know and love Grande from her youth starring in the show Victorious. She used to be known as the sweet redheaded girl, but is now known as a powerful feminist. Many young adults look up to Grande and her success.

Positions, her new album contains 14 new songs and features some other popular artists like The Weekend, Doja Cat, and Ty Dolla $ign. The most popular songs on the album include 34+35, Nasty, and Positions. Grande has more than 55 million monthly listeners on Spotify. The album also gathered a total of 173.54 million on-demand streams. This led the album into the second-largest streaming week for non-R&B/hip hop or Latin album in 2020.

Her song Positions, is the most popular song in the album. This song racked up more than 60,000 sales including 7.6 million streams. Grande’s song is a mixture of “pop” and “R&B” just like many of her songs. But Positions made it to the top of US Billboard charts 100, becoming Grande’s fifth number-one single along with 7 rings which was released in 2019 and Bang Bang which was released in 2014.

Many students at Saint Louis High School enjoy the music that Grande produces. One student, Mia Lawhorne, was a fan of her music. Lawhorne stated, “I really don’t like her new music because it’s not really sad and meaningful like her old music.”

Another student Hannah Bobzien, really enjoys Grande’s music. Bobzien stated, “I do like her new music because I feel it has a great sound to it and it is really catchy.” Her favorite song from the album is Positions. She also stated, “ I did not always like her music. Recently, I have started to like her music more and more, and now I listen to it whenever I can.”