SLHS band is off to a great start with Mr. Lawhorne 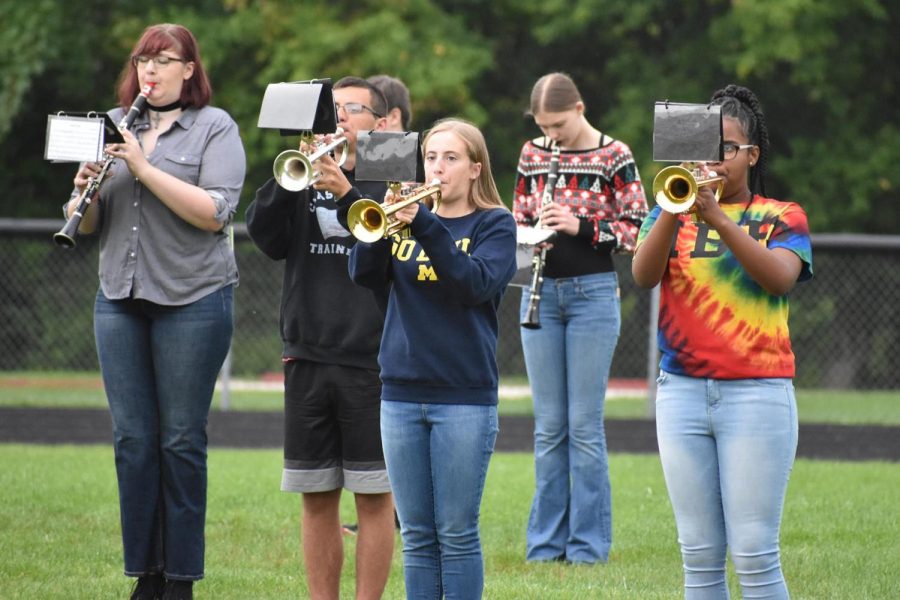 The marching band practices on the football field in preparation for Friday's games.

St.Louis band students are getting used to a new band teacher, Mr. Stephen Lawhorne. He has helped St. Louis have many different bands including: jazz band, marching band, and steel band.

Lawhorne is taking over the band for Ms. Hannah Livingston. He is now teaching the highschool and the middle school Sharks.  Colton Markwell stated, “I think that it is really fun and cool that we, as a band, can make playing music really fun, while also having the music sound really good.”  He thinks Mr. Lawhorne is a great teacher and very fun.

Alex Hardy agrees with Markwell that band is super fun and Lawhorne makes everything exciting for them. Hardy enjoys band because he can play the instrument he loves. He added, “The band is fulfilling its full potential. Everyone tries really hard every day, and every day we sound better than the last day. Everyone really tries their hardest, and it’s amazing having a great band teacher and having an amazing drum major.” Hardy, loves when they put together all of the band members’ talents and put it into one song and really try and make it sound the best they can.

The bands already have played a number of events. The marching band performs during half-time at the varsity football games getting the crowd pumped up and ready to finish the game. The steel band already has performed a lot in and out of St. Louis.