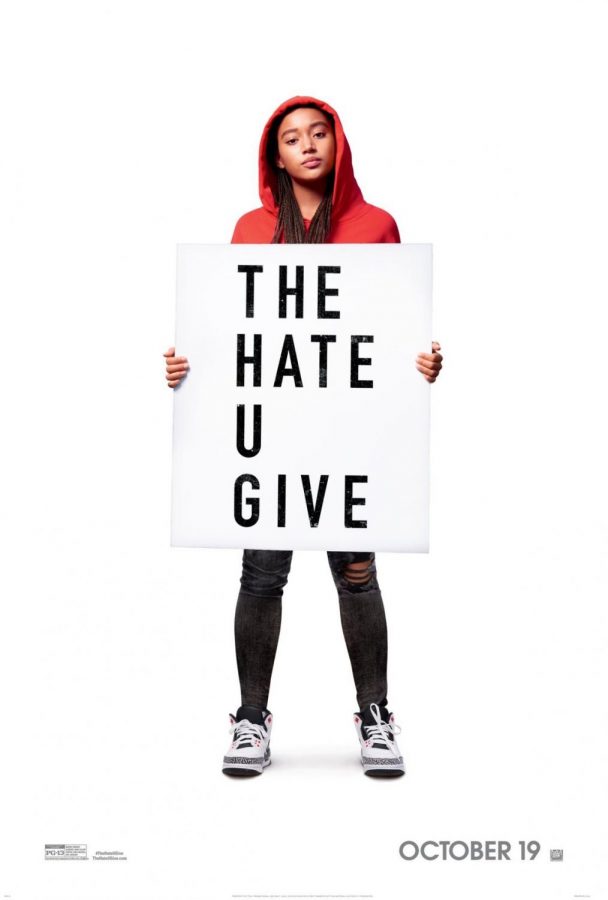 The Hate U Give movie poster.

The Hate U Give is a soul-stirring story about Starr Carter, a teen stuck between two worlds: her school, which is rich, fancy, and dominantly white; and her neighborhood, which is poor and dominantly black. The audience follows Starr as she navigates between the two very different terrains on a daily basis.

“Yes, it’s a teen melodrama, but it’s also an elegantly constructed piece of worldbuilding, a love story, a family history, a sociological spiderweb of cause and effect of hate,” Emily Yoshida, a review author for Vulture, stated about the movie.

Eventually, the two worlds collide when Starr witnesses the police shooting and subsequent death of her best friend, Khalil, an unarmed black teen. To make matters worse, Khalil’s death goes viral and stirs up conflict for Starr. With the weight of the world on her shoulders, Starr is forced to decide between the protestors in the streets and the friends she has at school.

“The Hate U Give tackles serious issues of racism and police violence with unflinching honesty and a stunning lead performance by Amandla Stenberg.” said Molly Freeman, an editor for Screen Rant, when expressing their opinion on The Hate U Give.

“The movie makes you look in a whole different perspective,” Modestie Hitchcock added. “I would recommend the movie to anyone.”

When comparing the novel to the movie, some of the story line that readers followed in the book did not make it into the movie’s final production. However, every book that gets transformed to movie form and brought onto the big screen will have these little flaws. Many people had wished to see more of the gang violence from the book show up on the big screen.

“I remind my readers that these are two separate mediums,” Author of The Hate U Give, Angie Thomas, explains. “They share the same DNA and that’s what truly matters.”

Overall, the movie painful, frustratingly familiar, and a true eye-opener of a film. Even though the movie and the book are both fictional, it brings to light some of the true issues arising in today’s society and how people in those situations have to process and deal with what they are given.